Update on the Ernestina Re-fit 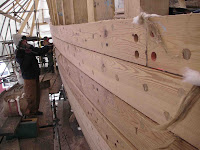 The historical Ernestina is heading toward completion of her major re-fit here at Boothbay Harbor Shipyard. With two months left before the launching of the Ernestina in April, the crew is working very hard to meet the deadline.

The planking covering the bow and midship is complete with the exception of one plank on the starboard side. With the completion of the planking, the chalking has begun on the hull. After the chalking is the sealing.

Posted by Boothbay Harbor Shipyard Shipwrights at 12:26 AM No comments: 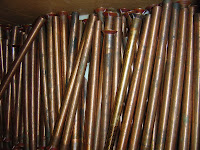 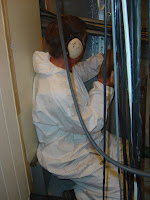 months from completion. The enormous task of refastening is 95% finished. The keel rabbet and stern post are left to be fastened.

The hull topside is being faired and the final coats of primer are being added. 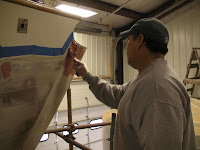 (woodwork and cabinetry) in the cabins is near 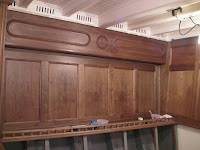 completion except for the paint and varnish. 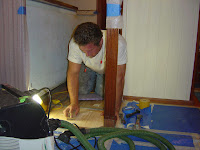 the shower drains, which have been rebuilt. Both the mechanical and electrical systems are in their final stages. 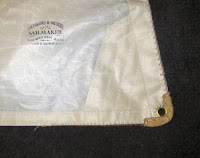 Nat Wilson is in the process of finishing the sails. The three new jibs and mizzen are completed with only the mainsail still to be sewn.

For the launching, we will wait for a very high tide in April.
Posted by Boothbay Harbor Shipyard Shipwrights at 10:03 PM No comments: