What do you suppose Key West, Florida, Charleston, North Carolina, Ketchikan, Alaska and Twin Bridges, Montana have in common with Boothbay Harbor, Maine?

They were all Charles Kuralt’s choices of places to be for a month in his book “Charles Kuralt’s America”. He suggests Key West for January and Ketchikan, Alaska for June. However, his vote for August was Boothbay Harbor, Maine. 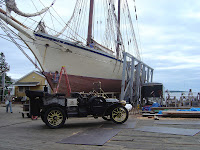 persuaded CBS to let him try out traveling and interviewing regular people from a motor home. He was given three months and it turned into a quarter-century project. "On the Road" became a regular feature on The CBS Evening News with Walter Cronkite in 1967. Famously enough, Kuralt hit the road in a motor home (he wore out six before he was through) with a small crew and avoided the interstates in favor of the nation's back roads in search of America's people and their doings.

Much like John Steinbeck’s “Travels with Charley” Kuralt looked for and found interesting people and places.

Here is a short selection from the August section about Boothbay Harbor, Maine from “Charles Kuralt’s America”.

I didn't get over my boat dream the whole time I was in Maine. I'm not over it yet. I am drawn to shipyards and anchorages wherever I go. If there's a bit of a breeze, the sound of a halyard slapping a mast arouses a great yearning in me.

In the perfect harbor …one late afternoon, no less than eleven of the passenger-carrying windjammers of Maine sailed in for a rendezvous. There was the last of the three-masted schooners, Victory Chimes, a survivor of the days when Maine bought its groceries in the West Indies and sent to China for afternoon tea. Anchored nearby was the pilot schooner Timberwind, which was launched in Portland in 1931 and has never left Maine waters; if you are born in heaven, her caption once said, why go anywhere else? There was the J. & E. Riggin, an eighty-nine-foot oyster-dredging schooner dating to 1927; and American Eagle, a gorgeous ninety-two-foot fishing schooner from the 1930s; and the oldest documented American sailing vessel in continuous use, the Stephen Taber, launched in 1871; and there were all the others, a maginificent show. These boats are captained by happy men and women who cannot imagine what else they'd rather do with their lives. I understand them. The passengers, most of them, return year after year for the sweet passages through the coves and islands, the quiet nights at anchor, the sea chantey concerts on deck, the lobster bakes ahsore. I understand them, too.

I went out to Nathaniel Bowditch, an eighty-two-foot topsail schooner which left the fleet in her wake in the Bermuda Race of 1923. Her captain, Gib Philbrick, is a wonderful man whose enthusiasm for what he does is written all over his face. Gib was once a fishing guide in te Rangeley Lakes. He was the basketball coach at the University of Maine. All the time, he wanted to be a schooner captain. He and his wife, Terry, took a deep breath and bought Nathaniel Bowditch twenty years ago.

"If a schooner ownes you," he said, "it owns you all year around. In the late fall, we go over every line and block, we have new sails made if we can afford it, we care for every tiny thing. We keep her in the water where she belongs, and throw salt water on her deck every day to keep the seams tight. In the winter when I'm feeling edgy, I come down and sit aboard.

One might ask, what do knees and the Larix laricina have to do with ships and shipbuilding? It turns out they have a prominent place in the history of shipbuilding as well as modern wooden ships.

The Larix laricina or the tamarak tree has shallow roots that grow almost perpendicular to the tree trunk. Therefore, they make tremendously strong knees. Knees are the right-angle root of the Eastern larch, or tamarack tree--also known as a hackmatack. Which are one of only three deciduous trees that lose their needles. The tamarack is a bog tree, fast-growing with shallow roots, which became prized because of its strength and durability to create braces in wooden shipbuilding. The tree often grows in peat moss and when it does, the roots do not freeze. It also is decay resistant, which is a big plus on ships.

For centuries, knees have been used in wooden ships and boats to strengthen and support deck beams and keels. When used vertically, they are called "hanging" or "standing" knees. Lateral knees are referred to as "lodging" or "bosom" knees.

Often, each mast has 4 lodging knees to help hold the shape against the stress of the movement of the vessel and the mast. In addition to the lodging knees the space where the mast fits also has several hanging knees.

The knees are seasoned from one month to four years depending on the thickness of the wood.

Until recently, Maine had one of the few “knee farmers” in the country. Newman Gee of 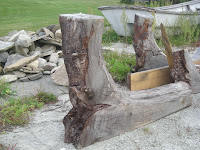 Newman’s Knees from St. Albans, Maine would dig up the roots by hand just as they did 100 years ago. He used a Wood-Mizer mill equipped with a special sled, which allowed him to saw the knees lengthwise, pivoting them as the saw blade advanced.

Historically, the tamarak not only provided knees from the roots but young stems were used for dog sled runners, boat ribs and fishtraps. Even the fine roots were used to sew birch bark and the wood was used for arrow shafts. The bark was used for medicine and the soft needles were used to stuff pillows and mattresses. These people really knew how to live “green”.
Posted by Boothbay Harbor Shipyard Shipwrights at 2:37 PM 11 comments:

As students locally return to school, we see the Harvey Gamage getting its final preparations before it picks up the new students in mid-September for Ocean Classroom's fall Semester at Sea.

The Harvey Gamage was recently launched after a summer of 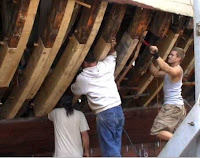 repair for a major plank and frame replacement renewal project. The focus for this year was the mid-ship. As part of a five-year cycle, the 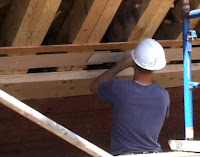 shipyard replaced around 64 futtocks (ribs of ship) and 22 planks in the midship area. 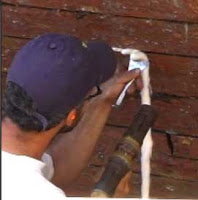 Spirit of Massachusetts and embark on an open-ocean adventure: sailing down the east coast...through the Bahamas...south to Hispanola...and finally into San Juan Harbor. Along the way they gain full academic credit for their studies in maritime history, maritime literature and writing, navigational mathematics, marine science and seamanship skills in collaboration with Ocean Classroom Foundation.

In a year, the Ocean Classroom ships will visit between 12 and 16 countries. They cover between 4,500 and 6,000 miles under sail while the students serve as ship's crew and are regularly attending classes. The Ocean Classroom Foundation has programs for students from middle school up through college.