What a Discovery! -A Launch Remembered 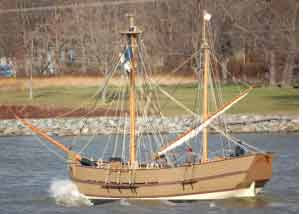 December 11th was mild for that time of year in Maine and that made it the perfect day for the crowd of 500 + that came for the christening of the replica of the 17th-century, Discovery at Boothbay Harbor Shipyard. The afternoon light was just beginning to soften as the crowd gathered slowly around the center of attention and the waters of the harbor waited quietly to accept the sturdy little ship. The ship’s sponsor, Captain Sally McElwreath, USNR (Ret.), 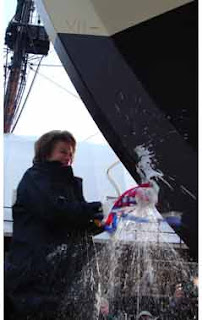 stepped to the platform, picked up the champagne bottle and announced: “I christen the Discovery. Godspeed to all who sail in her.” Thump went the first strike of the bottle as it bounced off the bow stem. Then the Captain drew back slightly farther and crack, the bottle exploded and champagne flew over the bow. The crowd cheered, the fife and drum corps struck up and a single cannon roared its salute out over the water. The harbor immediately echoed its muted return salute back to the ship. Ever so deliberately the 50-foot Discovery eased down the marine railway and into the water. It was her grand entrance and she made the most of it. Finally, there was the slightest motion signaling the Discovery was in her element, free of the land. If it had been four centuries ago when the original Discovery was launched, the cry along the shore would have been, “She swims!”

The original Discovery was one of three ships that sailed from London in December 1606. There were about 100 passengers and crew in the small squadron, all bound for a new world... They arrived at what would be called the Jamestown Settlement, Virginia in April 1607.

Maritime Program Manager for the Jamestown Settlement Foundation, Eric Speth, characterized the achievement of the original Discovery as “a voyage that changed the world.”