What is it with alcoholic beverages and ships? We all know the tradition of breaking a bottle of champagne on the hull of a ship for its christening

before it is launched. However, pouring whiskey on a plank of the hull of a ship is a bit more unknown.

In December, the shutter plank, or whiskey plank was installed on the CHEROKEE, the Sparkman and Stevens six-meter yacht being build by Boothbay Harbor Shipyard as an exhibit, at the Museum of Yachting. 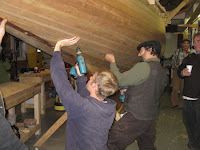 Why a celebration for this plank? A whiskey or shutter plank is the last plank, which needs to be put in place to finish a ship's hull. The Shutter Plank Party is an old tradition. Sometimes a glass of the last captain’s favorite drink is poured 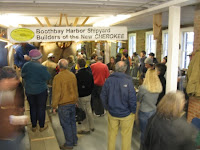 on the plank. However, the drink of the last captain of the original CHEROKEE is unknown so they used whiskey.

After a whiskey plank is put on, the hull can be treated, sealed, and painted, and work begins on the inner fixtures of the ship. Because this marks a turning point in the construction, it is traditional to take a brief moment to celebrate the mounting of this special plank. Often, this tradition involves shots of whiskey for all. 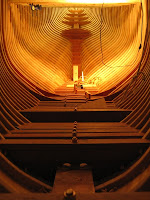 Although the CHEROKEE is still far from finished, once the shutter or whiskey plank is installed, a major milestone in the construction has been reached. 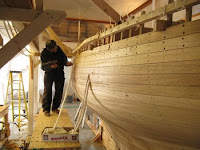 the CHEROKEE, from the lofting to the completed hull. A larger view of these images can be view here.

If you would like to see more great pictures and read more details of this project click into the CHEROKEE Blog by Tom Daniels.
Posted by Boothbay Harbor Shipyard Shipwrights at 5:04 PM 1 comment: 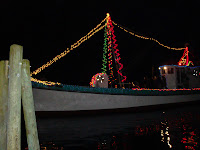 On a cold winter Saturday night during the holiday season, one might ask what happens in a small coastal town in Maine. One special activity in Boothbay is the Boothbay Harbor Lights Boat Parade. On Friday night Joe Reardon, Micheal Connors, Jeff Dick, Michael and Pam Bauregard and Michelle Farnham gathered to decorate the Glenn-Geary 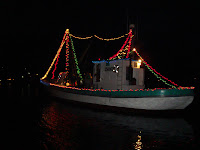 At 5:00, the parade began to circle the harbor from the town float around the east side to the shipyard on the west side and back to the town float. The judges made up of merchants from town, 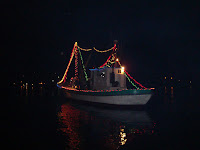 looked at the 13 participating boats and chose our own Glenn-Geary, piloted by Capt. Dave Thompson wearing his white beard and red Santa hat, as FIRST place.

The shipyard won bragging rites for the year, along with $100 and a silver engraved cup. Congratulations to all who participated in this celebration. Pictures of the event are available here.
Posted by Boothbay Harbor Shipyard Shipwrights at 2:28 PM No comments: 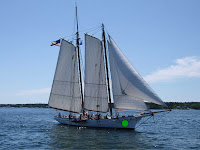 As we enter into the holiday season, the colors red and green come to our mind as colors of seasonal decorations. Where as, in the summer, those colors mean something very different for those that maneuver sailing ships and powerboats along the coast of Maine. Red represents the port (or left) and green represents the starboard (or right) side of a ship or boat.

Historically, before ships had rudders on their centerlines, they were steered by a specialized oar. Located in the stern (back) of the ship, this oar was held by an oarsman. However, like most of the rest of society, there were many more right-handed sailors than left-handed sailors. Therefore, the oar was usually on the right side of the ship. The Old English word steorbord evolved into starboard, which meant, the side on which the ship is steered.

Originally, the port or left side of the ship was known as larboard. Larboard is derived from the 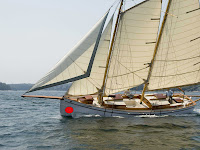 practice of sailors mooring on the left side (the larboard or loading side) as to prevent the steering boards from being crushed. The term larboard, when shouted in the wind and weather, was presumably too easy to confuse with starboard. Later in the 1850’s, the word port came to replace it, referring to the side of the ship where cargo is loaded from the port.

So, if you have difficulty remembering left-port and right-starboard, here are a couple of suggestions:
1. "Port", "left", and "red" are all short words while the other side are long words “starboard", "right", and "green".
2. Or if you are a wine lover this one might be the easier to remember. “Is there any Red Port Left in the bottle?
Posted by Boothbay Harbor Shipyard Shipwrights at 5:07 PM 3 comments: