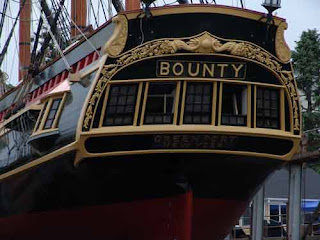 Our shipwrights spent more than a year rebuilding this famous ship from the waterline up. During this period the working crew grew from 18 to 49. This 412 ton vessel would not be with us today had it not been for Marlon Brando's sit-down strike. When he learned it was to be burned in the final reel of Mutiny on the Bounty, he refused to act in another scene until MGM created a scaled down version of Bounty for the burn scene.
The Bounty’s current protector is Bob Hansen. When he first brought her to us in 2001, Bounty had been leaking upwards to 30,000 gallons of water an hour at her pier. Our job was to rework the hull from the waterline down. During this recent visit to the shipyard, the scope of work included: Fastenings; 7,000 trunnels (locus wood dowels)
Keel: 54,000 lbs lead
Planking; 35,000 board ft of oak and Douglas fir
Deck: 3,500 board ft Douglas fir
Framing; :30,000 board ft of oak
We wish the Bounty and her crew fair winds and following seas.
A highly pleased owner will now take her on a recreation of her original voyage, starting in England and ending up in Pitcairn Island.
Watch the launching of the Bounty video.
and
Follow the Bounty's adventures

Posted by Boothbay Harbor Shipyard Shipwrights at 4:06 AM No comments: 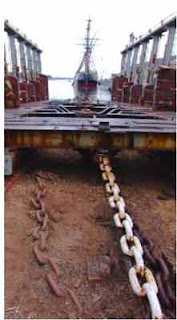 The Boothbay Harbor Shipyard had its' birth in 1869 as a marine railway. Since that time, we have launched a number of four masted schooners. During WW II we built 19 large wooden minesweepers and during the Korean Conflict another 18. Today the yard operates with two marine railways-one rated for 700 tons and the other 150.
During the last two and a half years the large rail has been quite busy with vessels like the 178' Barkentine Gazela of Philadelphia, the schooner Roseway, Grand Banks Schooner Sherman Zwicker and the tall ship Bounty. This yard is one of the 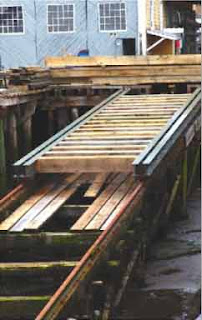 last of the large marine railways left in the North East.
Posted by Boothbay Harbor Shipyard Shipwrights at 8:24 PM No comments:

Welcoming Existing and New Friends to the Harbor 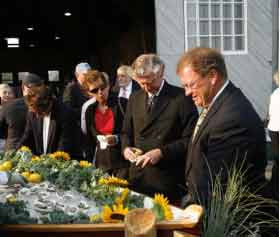 Summer at Boothbay Harbor Shipyard has always been a time to see old friends and make new ones. This year we were kept busy by a steady flow of owners looking to have tasks large and small completed while cruising through the delights available along Maine’s coastline.

August 3rd was the day! We transformed the Boothbay Harbor Shipyard into something as close to Camelot as possible. Pot O' Gold a 1929 Consolidated commuter and Ibis our 1904 New York 30 (once owned by J P Morgan) were rolled out as our two prize vessels and 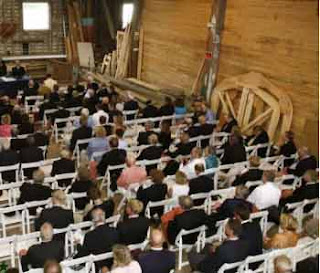 backdrops for the festivities. Old boats served as cocktail and serving tables. Our antique walls rang with drollery.The New York Yacht Club, with 100 vessels and 500 members came to the Boothbay Harbor Shipyard for the start of their 2007 annual cruise. The skipper's meeting, the cocktail party and the lights twinkling on the harbor from some of the most well known yachts in the world made the whole occasion-. . . well, like Camelot.
Posted by Boothbay Harbor Shipyard Shipwrights at 10:48 AM No comments: