What is a Six-Metre sailboat and why is it often actually 12 meters long? 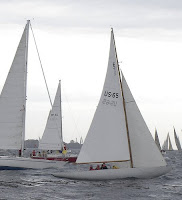 together under a handicap system. It is important to note the term metre does not refer to the length of the yacht; it is the product of a formula and denotes the class. A Six Metre yacht can be from 10 metres to 12 metres in length.

The Six-Metre class became very popular, and was chosen as an Olympic class in 1908 Summer Olympics.

The 1920-1930s was the “golden age' of the Six-Metre Class, attracting top sailors and designers. However, Sixes were later criticized as too expensive and towards the end of 1930s they became more so, making the class too exclusive.

Already in 1929, 5.5 Metre class was established as a cheaper and

smaller alternative for Sixes, and the last year the Sixes was an event in the Olympics was in 1952.

The sailing events in the very first modern Olympics in 1886 were cancelled due to weather. The only other year there were no sailing events (other than war time) was in 1904 in St. Louis.

Boothbay Harbor Shipyard is sponsoring the building of the Cherokee, a 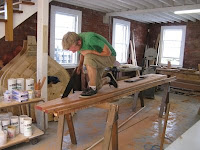 Six-Metre sailboat at the Museum of Yachting, in Newport this summer.

The boat will be completed in time for it to compete in the World Championships for Six-Metre sailing yachts in October 2009 hosted by The Museum of Yachting at Newport, Rhode Island. This will be the first time the United States has hosted the international event since 1987.

We also, have an Olin Stephens designed Six-Metre here at the shipyard ready to be restored. 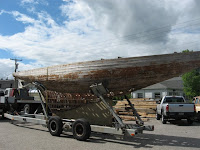 Ciocca II is a 1948 Sparkman & Stevens International Six M. NO 794. There is time to restore this Six-Metre and compete in the 2009 World Championships in Newport.
Posted by Boothbay Harbor Shipyard Shipwrights at 2:28 PM No comments: 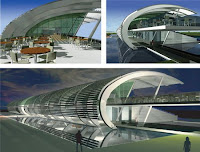 The U.S. Olympic women's eight sliced through the 2,000-meter course with precision, winning its preliminary heat in 6 minutes, 6.53 seconds. This allowed them to qualify for the finals along with Romania, winner of the second heat.

Elle, a first time Olympian and 6'2" Stanford undergraduate has won many national and 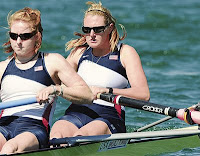 international awards. Representing Maine and the USA along with Elle is Anna Goodale from Portland.

In a rowing shell, the first seat down the river is number one. Elle and Anna are seated in seats between three and six which are called "the engine room" so as you can imagine, Anna and Elle are very strong.

Watch the US Team in action.
Posted by Boothbay Harbor Shipyard Shipwrights at 8:13 PM No comments:

Feeling the wind in your hair and breeze on your face on a massive smooth sailing schooner is one of the most magnificent feelings of the summer in Maine. Of course, there are those that would agree with the wind and breeze, but differ by saying, they like the sleek lines that allow for that need for speed, especially with the 2008 Summer Olympics starting today in Beijing.

A total of 400 athletes with 272 boats from 62 countries and regions compete in 11 events of nine classes of the sailing regatta. The events last from August 9 to 23.

Representatives from all teams marched on the stage and displayed their flags at the Olympic Sailing Center Themed Park, where the launching ceremony of the Olympic sailing regatta was held on Friday, August 8. You can follow the races here with the International Sailing Federation or the Olympic site with more dates and results.

finished two races on the opening day of the sailing regatta on Saturday afternoon. Watch a VIDEO of the Yngling in action.

The first race of the 2008 Summer Olympics started with the Ynling Fleet. Sarah Ayton, Sarah Webb and Pippa Wilson from Great Britain, lived up to their billing as favorites with a second and third place finish in Saturday's two opening races putting them in the overall lead.

On Sunday, the 49er fleet begins its races. It will be a tough one, with a great depth of ability so the winners could come from amongst many of the teams. In the right conditions, the races are short and quick and can be very physical for the crews.

Sitting comfortably in our state-of-the-art newly renovated 6,000-sf climate controlled service bay is a member of the famous Fife family, Belle Aventure with her sleek lines. Fife yachts have competed in races worldwide including the America’s Cup Races (started in 1851), which predates the Modern Olympics (1896) by 45 years.
Posted by Boothbay Harbor Shipyard Shipwrights at 6:34 PM No comments:

Arctic Explorer on the Ways 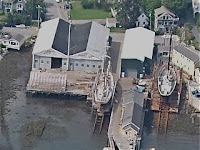 While researching for a video on the Ernestina, I discovered that the ship getting its bow replaced, sitting on our Boothbay Harbor Shipyard marine railway 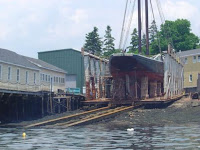 has a rich history and amazing stories to tell.

The Ernestina is one of only two sailing Arctic exploration vessels left afloat in the United States, the other being the schooner Bowdoin, also a National Historic Landmark. After a long and distinguished 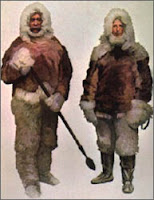 Seventeen years earlier, Bartlett navigated Peary and Matthew Henson to the North Pole in 1909, on the Roosevelt and was considered the greatest ice captain of the 20th century. After 1924, under Capt. Bob Bartlett, Ernestina

or known at that time as "the little Morrissey" made 20 regular voyages north. On one voyage they reached within 600 miles of the Pole. They documented the frozen north and its flora and fauna. Its patrons included the National Geographic Society, the Smithsonian Institution, the Cleveland Museum of Natural History, the Museum of the American Indian, and others.

Star of Pathe newsreels and David Putnam's adventures for boys, David Goes to Greenland and

If you look at some of the "Newsreels" on the British Pathe website, you can see actual footage of Capt. Bob on the Morrissey around 1934. Included is footage of him battling storms and icebergs among many other adventures.

In 2009, Capt. Bartlett will be celebrated from Newfoundland and Labrador to New England. When 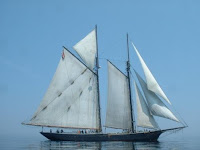 Shipyard are completed, she will be ready to begin new stories and adventures with a new generation.

Watch the videos below taken on the Effie M. Morrissey with Capt. Bartlett and his " little Morrissey".


Posted by Boothbay Harbor Shipyard Shipwrights at 6:00 AM No comments: