At this year's Windjammer Days Festival, June 24-27, you

will find something for everyone and most of the events are FREE to the public! Enjoy the beauty of fully rigged windjammers sailing into


You will see twelve beautiful windjammers sail into Boothbay Harbor, including a motley gang of

pirates that will invade Boothbay Harbor striking not terror but delight in the hearts of all those they encounter.

The new "Jammers and Joggers" race, sponsored by 94.9 WHOM will kick off the Festival at 7:30 am.  Come cheer on Dr. Alamo, a popular Boothbay Harbor physician and veteran marathoner, and his family and the Schooner Timberwind with Captains Bob and Joe Tass, as they race down the coast of Maine by land and sea for nearly 50 miles.

Sherman Zwicker will be on our railway or dock during the festivities.


Posted by Boothbay Harbor Shipyard Shipwrights at 12:31 PM No comments: 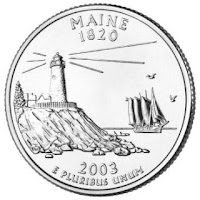 When summer arrives and one thinks of Maine, sailing ships and lighthouses are two of the first images that come to mind.  In 2001, when a Rockland family began a design for the Maine quarter, they also had in mind these images.

The US Mint began its state quarter program in 1999 with plans to mint a representative quarter for each state in the sequence they became part of the union. In May, 2001, the Maine Arts Commission began the process to decide what image would represent Maine on the Maine State Quarter to be minted in May, 2003.  A Rockland family presented a design concept that included the Victory Chimes sailing by the Pemaquid Lighthouse. The commission chose it as one of four finalists in the design competition. Governor Angus King asked the citizens of Maine to choose the design that would grace their state quarter. In August, 2002 the people of Maine voted and made their choice. They chose the Victory Chimes, which recently left our railway, as one of the enduring images along with the Pemaquid Lighthouse and the White Pine that will forever represent Maine on the quarter.

The Pemiquid lighthouse is one of 60 lighthouses that dot the Maine coast.  It receives more than

100,000 visitors each year.  The name “Pemaquid” is said to have had its origins in an Abenaki Indian word for “situated far out.”  In May 1826, as maritime trade, fishing, and the shipping of lumber were increasing in midcoast Maine, Congress appropriated $4,000 for the building of a lighthouse at Pemaquid Point.

The land was purchased from Samuel and Sarah Martin— descendants of survivors of the Angel Gabriel—for $90.  The Angel Gabriel was a 240 ton English passenger galleon, which was commissioned for Sir Walter Raleigh’s last expedition to America in 1617. She sank in a storm off Pemiquid Point, near the newly established town of Bristol, Maine on August 15, 1635.  Since then, the lighthouse has seen many lighthouse keepers and their families and saved many ships from shipwrecks on the rocky Maine coast.
Posted by Patti Irish at 3:00 PM No comments: 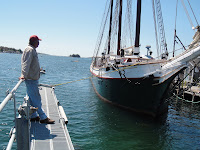 Victory Chimes returned to the large railway at BBH Shipyard for seasonal maintenance.

Victory Chimes, built in 1900, as Edwin and Maud, which was named for the two children of her first Captain, Robert E. Riggen, is the only surviving example of the Chesapeake Ram type schooner in existence today. She was built for the mid-Atlantic and Great 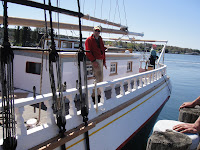 Lakes where it was necessary for a schooner to fit through shallow navigational canals. Her original cargo consisted of lumber, grain, soft coal and fertilizer, which she carried in and out of Chesapeake Bay until 1945 when she was converted to carrying passengers.

In 1954, she was purchased by a syndicate, brought to Maine and re-named Victory Chimes.  Victory Chimes operated as a successful charter business on the coast of Maine until 1984 when she was sold to a Minnesota banker who brought her to the Great Lakes. Shortly after,

she was purchased by the owner of Domino’s Pizza, Mr. Thomas Monaghan, and re-named
Domino Effect and used by the company for employee incentive cruises.  In 1988, Mr. Monaghan had the schooner restored by Samples (now Boothbay Harbor Shipyard) and can arguably be credited for saving her life.

In 1989 she returned to the coast of Maine and subsequently in 1990, was purchased by her

current owners, Capt. Kip Files and Capt. Paul DeGaeta who named her Victory Chimes once again and returned her to the passenger trade carrying up to 50 passengers. Honored by the State of Maine as “The premier schooner of the Maine sailing fleet” in 1991, by the United States National Parks Service as a “National Historic Landmark” in 1997.  She remains a successful and well kept “working” vessel steeped with important U.S. maritime history.
Posted by Patti Irish at 5:00 PM No comments:

We know your summers are going to be packed with amazing events so we would to update you with some great events planned for here in Boothbay Harbor. We would love to have you join us the week of August 5-12, which will be packed with sailing of all levels.

Junior racers on Wednesday and Thursday, August 8-9th. The Boothbay Harbor Yacht Club will host the 2012 Maine State Optimist Championship. This is a National Sailing Association (NSA) Junior Sailing event.  They expect between 50 and 75 Opti sailors to participate in this exciting two-day event.  Optis are small, single handed sailing dinghies limited by the Optimist Association Class rules to junior sailors 15 years or younger.  The Optimist is recognized as an International Class by the International Sailing Federation.  It is one of the most popular sailing dinghies in the world with over 150,000 boats officially registered within the class.

The last event of the week will be the 10th Annual Shipyard Cup on August 11 &12. Serving yacht

owners with sailboats averaging 100’, this is a spectacle of modern and classic yachting not to be missed by any boating enthusiast.
Posted by Patti Irish at 12:38 PM No comments: 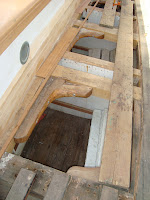 The sailing and boating communities are making last minute preparation for the summer season in Maine.  The SHERMAN ZWICKER has been in BBH Shipyard for extensive deck repair and now is getting her last minute summer overhaul to prepare for a busy summer. 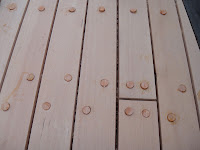 The SHERMAN ZWICKER, is a 142’ Grand Banks wooden, auxiliary fishing schooner.  Built in 1948 at the Smith and Rhuland Shipyard, Lunenburg, Nova Scotia, she was the largest Grand Banks schooner ever built.. The slightly modified traditional Banks schooner was among the last of her type to be built and may be the only one left floating and functional.  She is fitted with a large marine diesel engine as a prime mover.

Vessels of her type were used in the Grand Banks dory fisheries out of Lunenburg, Nova Scotia and other ports until the mid-sixties.  She could carry 200 tons of fish and was referred to as a 12-dory, which had 24 active fishermen with an overall crew of about 28 men.The SHERMAN ZWICKER made her last trip to the Banks in the early sixties.

In the summer, SHERMAN ZWICKER spends much of her time at the Maine Maritime Museum in

Bath, Maine.  As a museum, the schooner represents about 1000 of sister vessels which sailed to the Banks in the salt fish trade. You can see the "ZWICKER" in Boothbay on the BBH Shipyard dock during Windjammer Days, June 24-27.

Walk through SHERMAN ZWICKER here.
Posted by Patti Irish at 9:40 PM No comments: