In December of 2007, J.&E. Riggin was vandalized at her berth when severed lines caused her to be carried into harms way. Considerable

damage was caused to her entire bow section. We took her under tow from Rockland to Boothbay Harbor and commenced work to repair the damage. Using our recently renovated 75 ton marine railway, customized blocking was placed under her hull by the shipyard’s dive team. Shore-based repair crews worked steadily to ensure that she was completed in time for the charter season of 2008. 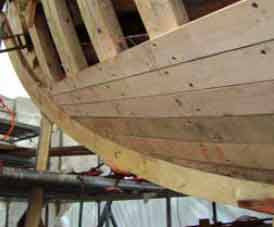 J. & E. Riggin was built on the Maurice River in Dorchester, New Jersey in 1927. Charles Riggin
had her built for his oyster dredging fleet and named her after his sons, Jacob and Edward. Shewas always known as a quick, light air vessel and her speed was proven in 1929 when she handily won the only official Oyster Dredging Race in the Delaware Bay. She was used for oyster dredging until the 1940's, when the fishing regulations changed.

“I can finally report that our lady looks REALLY good. Thank you so much Boothbay Harbor Shipyard for your crew and your love of these beautiful boats.” Captain Anne Mahle (co-owner)

The Riggin's sparred length is120 feet, 89 feet on deck, 23 feet at the beam and draws 7 feet with the centerboard up. She is a bald-headed schooner with low sides and an elegant
spoon bow, uses a yawl boat for auxiliary power. She can carry 24 passengers on 3, 4, and 6 day sailing trips.

Posted by Boothbay Harbor Shipyard Shipwrights at 5:17 AM

Well done BSY! She looks beautiful. Thank you for taking great care of a vessel I love dearly!