Building a CHEROKEE at the Museum of Yachting in Newport

David Stimson, yacht designer and general manager from BBHS, has been in Newport now for about a month. Check the CHEROKEE blog for a detailed update on the progress of the CHEROKEE. 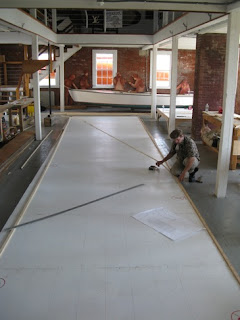 From the design of a 6-meter racing yacht that was published in the January 1928 Yachting magazine, Olin Stephen's esteemed career as a great yacht designer was launched. Olin apprenticed under Philip Rhodes and Rod, his brother worked at Nevins Yard in City Island, New York. At the age of 21, Olin entered into a partnership with the successful Yacht broker Drake Sparkman and together they launched Sparkman & Stephens, Inc.

On Long Island Sound, in the 1930's, one very popular yacht was the 6-meter racing yacht. Sparkman and Stephens, Inc (S&S) designed 39 of these yachts. Two of these 39 stood out as exemplary: CHEROKEE and JILL.

The Museum of Yachting is pleased to announce the building of a new CHEROKEE. which is part of an exhibit on the history of S&S. The yacht is being built from plans provided by S&S and will be launched in time to compete in the 6-meter World Cup—also being held in Newport 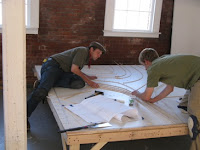 Construction management is being lead by Maine's David Stimson, a yacht designer and general manager of the Boothbay Harbor Shipyard in Maine. For over thirty-five years David has designed, built and restored wooden boats ranging from catboats to larger-scaled passenger vessels.

According to the International Yacht Restoration School, (IYRS) this new build will rigorously conform to historic design and construction standards necessary to compete in the 2009 Worlds. This design is sanctioned by the 6-meter Association of North America as a replica. Only one copy of any given design is allowed to be built. This copy can be built only after it can be prove that the original yacht is no longer in existence.

A good place to muse on oil painting in Western art history online, I find, is at this site at wahooart.com. There is a huge archive of digital images of artwork now housed in art museums around the world.
The company makes canvas prints and hand-painted, oil painting reproductions to order, from your selection of images from this big archives.
It's some resource for art lovers and historians. There are many images of works by famous artists of the past that I have never seen.
From their home page at wahooart.com, you can browse by the hundreds of artists there, movements in art, art media, historical timeline and even by subject matter. There is much biographical information about the artists.
I am always fascinated by the way the 19th century English landscape painter, William Turner, used layers of luminous oil paint to recreate his blazing landscapes. Clicking http://EN.WahooArt.com/@/WilliamTurner , I find his paintings indexed in a floating 3D gallery at the site.

Yachting in newport is really amazing, thanks to shared this.