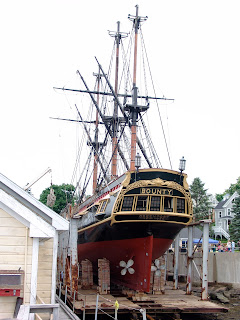 We were excited to have Bounty back at the shipyard this September and October.  She has been here for about four weeks getting minor repairs.  BBHS built a new bottom on the boat around 8-10 years ago, which was a major refit.  Five years ago, another major refit replaced all the topsides, from the waterline-up.

This visit Bounty had some bottom work and caulking to do, topside planking and new spars to build.  Refitting new fuel tanks, water tanks and some minor systems work, also needed to be done.

The  original HMS Bounty, which in April, 1789, dealt with a mutiny, which ultimately led to the ship’s sinking near the Pitcairn Islands in the South Pacific. This replica of the HMS Bounty was built in the early 1960s in Lunenburg, Nova Scotia and has had a 50-year movie career.  In addition to “Mutiny on the Bounty,” it has also been featured in 1989’s “Treasure Island,” 2006’s “Pirates of the Caribbean: Dead Man’s Chest” and 2007’s “Pirates of the Caribbean: At World’s End.

More pics can be seen on the HMS Bounty facebook page.

Email ThisBlogThis!Share to TwitterShare to FacebookShare to Pinterest
Labels: Bounty